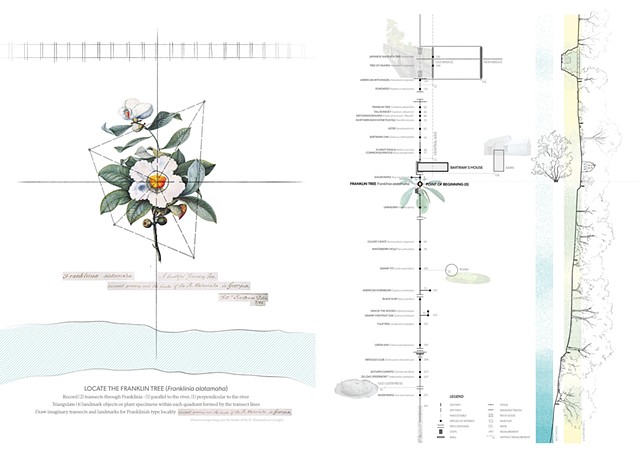 The Franklin Tree, located in Bartram’s Garden, bears a perplexing history; On a botanical excursion into the ancestral lands of the Cherokee and Creek people along the Altamaha River in Georgia, John and William Bartram recorded the first western scientific instance of this flowering understory tree, brought its seeds back to Philadelphia for cultivation, and appropriated its name as a gift for their friend Benjamin Franklin (Franklinia alatamaha). The species quickly became extinct in that original location and is yet to be found elsewhere in the wild, meaning that all surviving specimens in nurseries and arboreta around the world descend from the Bartrams’ cultivation.

Measuring in paces, I located the garden’s treasured Franklinia specimen along a transect from the railroad to the riverfront, recording all of the other cultivated species I observed along the way. As I paced, I pondered Franklinia’s many irreconcilable and contradictory narratives; the plant bears the names of both a founding father and its original geographic origin, which contains its own troubled history as an indigenous fishing camp turned colonial crossroads and military fort. Despite its origin, and mysterious extinction in the wild, the plant survives around the world as an artifact of the extractive enterprises of botany and colonization. The stories we project on to plants through cultivation are truly confounding.